skip to main | skip to sidebar

wow what a weekend

well it was full on, so much has happen this weekend that i think i will need a week off LOL.

So on Thursday it was Misses birthday so we had a lovely day playing around with anything she wanted to do, so must of the day we were outside it the cold riding the bikes. Then later that day playing with her Mr potato head, that she got for her birthday. In the mean while i was cleaning the house because Matt's mum is coming on the Friday, mean you I was high on painkillers at the time because I have a tooth ache, I was in so much pain. After being on the phone for a hour to find a dentist (my dentist is on holidays gggggrrrr), found one who saw me at 3.15pm I was out by 3.30, $180 later feeling heaps better, well not the pocket.

Friday morning I went to the photography class, we were get some photos ready for the show in Sept at the school, Next week we will be mounting the photo's, how exciting. So after the class I had to go up town to get some of my photos enLAGERED.Then the shopping. Pat came later in the afternoon. Saturday was Nick's Birthday so we thought it would good to go to the snow day at the sky way,WOW it was great had a lot of fun and did heaps of things. throwing snow ball(not real snow), face painting, snow hunt,magic tricks, heaps of entertainment for the kids. but i think the best bit it was all free. so after a yummy lunch at the cafe,I had to get ready for dinner with the family party, Nick asked to have crepes for dinner,yum one of my fav too. so like every birthday dinner i have to put all the party things up like the streams, balloons, the dinning room looks. Sunday was Blackheath markets so like Pat was here we went up there, then I knew how much she loves antique thing i took her to the big antic place in Blackheath, after she was there for 2 and something hours ggggggrrrrrr, Mum called me to say we should go to lunch somewhere after dad has finish working at the markets. So off we went to MT VIC hotel to have lunch in the sun. got home and crashed. all the walking around looking at old thing, was killing my feet and Matt's.

so like you can see it was a non stop weekend, but to top things off Stephy fell sick after that busy weekend, poor little thing she is not well at all, so fingers cross she will get better soon.

oH look at the little cupcakes i made for the daycare for the kids. Heyyy i missed that post !?!??!
waoww, those cupcakes look sooo yummy !! and soooo coooool facepainting !! hope you took lots of fotos to scrap those !!! 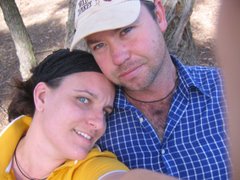 Marie
Somewhere, Earth, Australia
Wife to a great man, mother of 3 cute kids and a great friend to a handfull of mates. I love to take photo's of anything and everything.

here are my photo"s for her space my space

web site i look at: